On 1 February 2020 the icebreaker Kapitan Khlebnikov was put into operation. The vessel has been used to ensure safe navigation of large-capacity tankers and gas carrier vessels during the ice season since 2009 when Sakhalin Energy brought into operation the first LNG plant in Russia. This year the works to ensure safe hydrocarbons loading in Prigorodnoye will last for 2 months.

The coast of Aniva Bay where the LNG plant is located would hardly freeze in winter, which makes it the ideal place for exporting oil and LNG produced under Sakhalin-2. The icebreaker is required in the area to break the ice traditionally brought by the strong winds blowing from the Sea of Okhotsk to cover the most of the water area in winter.

Vyacheslav Kivaev, Prigorodnoye Offshore Superintendant, says that the key advantages of the ice breaker are its width (26,74 m) and draught.  Thanks to its width the vessel can clear a path wide enough for tankers and gas carriers to pass through.  And its draught allows to cut ice near the LNG loading jetty in the eastern shallow area.  Therefore, the vessel helps ensure safe, reliable and cost effective LNG transportation, adds Vyacheslav Kivaev,

The icebreaker operating under the Russian flag can cut the ice up to 1.5 m thick near the LNG loading jetty from the working side before the gas carrier approaches.  In addition, it is used to perform ice rarefaction in the shallow water area during mooring operations. It is required to help the ice pushed by gas carriers to the jetty move freely to another side. It excludes the risks of formation of an ice sheet covering dozens of meters around the jetty that could prevent the icebreaker from mooring.

During loading operations Kapitan Khlebnikov breaks and washes off ice around TLU to relieve the pressure of drifting ice on the tanker hull.

The workscope of Kapitan Khlebnikov icebreaker extends beyond operations performed in the Prigorodnoye water area. The vessel also performs ice reconnaissance in port approaches in Aniva Bay to provide experts with data in addition to satellite information.

Based on the results of ice reconnaissance specialists produce ice condition maps for Aniva Bay and give recommendations to the crews of tankers and gas carriers regarding the safest route to the Prigorodnoye Port. 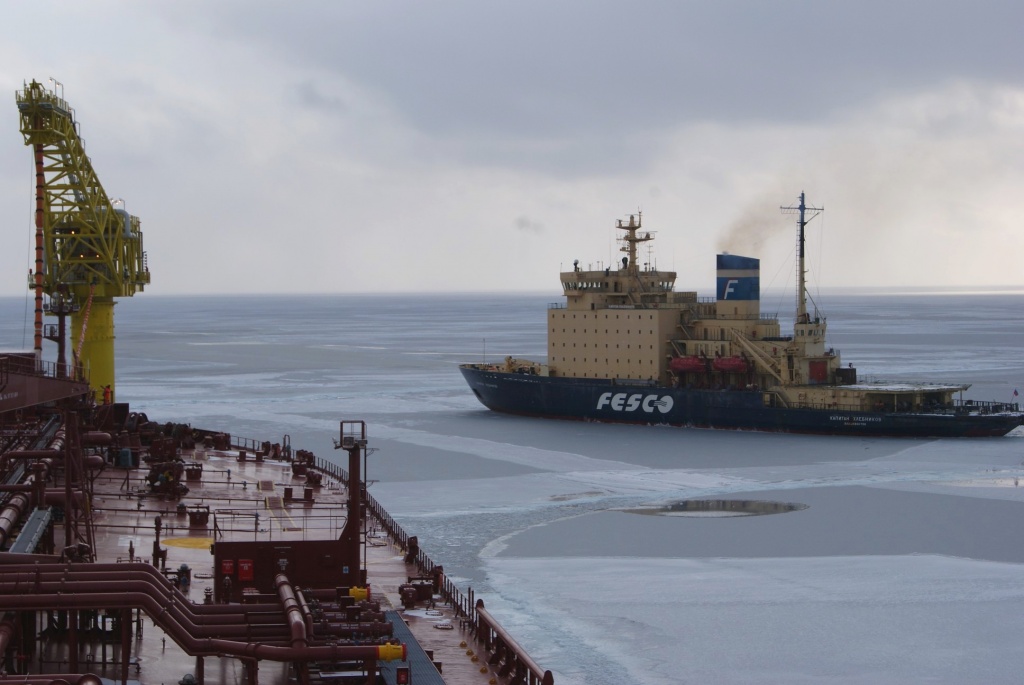