An exhibition by the Uilta craftswoman, who paints on fish skin, opened at the Palace of Nations in Geneva as part of the 8th Annual United Nations Forum on Business and Human Rights. The event was organised by the Permanent Mission of the Russian Federation to the United Nations, the UN Global Compact, and Sakhalin Energy.

Uilta, an indigenous minority of the North of the Sakhalin Oblast, use fish skin to make household utensils, clothes, shoes, bags, and other household items. But Veronika was inspired by the uniqueness of the material and embodied her creative ideas in the form of pictures of scenes from traditional life and oral legends of her people.

The exhibition features ten works by the artist. “The fish skin is so picturesque and unique like human fingerprints that you don’t even need to draw anything on it, just add a few strokes. This is an amazing material that I can’t part with for more than 30 years. I often prepare it myself, but sometimes other people bring it to me,” said Veronika Osipova. “We preserve the memory of our ancestors in many ways: tales and legends are published, which had been collected over time by linguists and ethnographers. I illustrate these legends, and they come to life.”

Tatyana Valovaya, Director General of the United Nations Office at Geneva, welcomed the exhibitors and noted the symbolism of holding the event in the International Year of Indigenous Languages. “It is very important to preserve the culture and heritage of indigenous peoples, their traditional lifestyles, and, of course, languages,” she said.

The Permanent Representative of the Russian Federation to the UN Office and other international organisations in Geneva, Gennady Gatilov, said that the exhibition was an excellent example of fruitful cooperation between the state and business in supporting indigenous minorities.

In turn, Tatyana Derivedmid, Head of Social Performance at Sakhalin Energy, agreed that respect for and support of human rights, including vulnerable social groups, are an integral part of the company’s activities. “Sakhalin Energy operates in a region inhabited by approximately 4,000 representatives of the main indigenous ethnic groups: the Nivkh, the Uilta, the Evenk, and the Nanai. Therefore, the company set itself the task of promoting the sustainable development of Sakhalin indigenous minorities, as well as preserving their unique culture and languages,” added Tatyana Derivedmid.

The participants of the event thanked for the opportunity to touch the wonderful world of the Northern region and learn about the people of Uilta during the Forum. After the official part, the artist gave a tour around the exhibition and told about each of her works.

This has been the third exhibition of Veronika Osipova this year: the first one was held at the UN headquarters in New York, and the second one—in the framework of the Treasures of the North International Exhibition-Fair in Moscow. 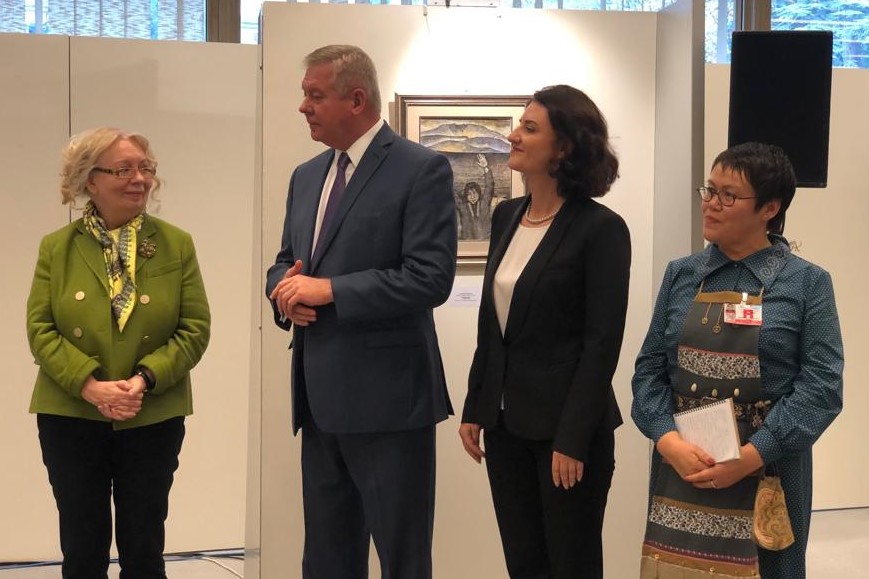